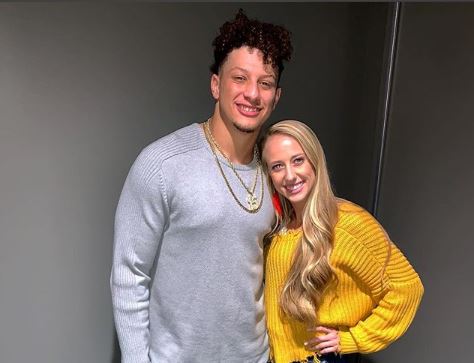 Brittany Matthews is a former American professional soccer player, fitness trainer as well as a businesswoman. She is recognized as the longtime girlfriend of professional NFL player, Patrick Mahomes II, who serves as a quarterback for the Kansas City Chiefs. Brittany played soccer for Whitehouse High School and went on to represent the University of Texas at the collegiate level.

As a professional player, Brittany was signed to the Iceland pro team UMF Afturelding/Fram in the year 2017. She is now the owner of her fitness brand named, Brittany Lynne Fitness, through which she offers fitness and health training to clients. She is also popular for uploading her workout photos and videos on her Instagram profile.

Read more: Who Is Smrtdeath?

Brittany has not married anyone yet.  But she is dating her boyfriend named, Patrick Mahomes II. The couple attended Whitehouse High School and are also a high school sweethearts, who have been together for about six years.

In March 2016, Patrick even shared a post on his Instagram where he revealed that they celebrated their fourth anniversary together. Two months before celebrating their anniversary, Brittany also posted a tweet confessing her love for him.

While the couple attended the same high school but they went to rival colleges. They now live together in Westport, Kansas City, Missouri and are the proud parents of their pit bull puppy, Steel, which has its own Instagram account. Brittany often travels with her boyfriend and cheers him from the stands during his matches.

The couple is both dedicated to fitness, and they push themselves towards better health and happiness. They are living happily and spending quality time with each other. It’s quite certain that Brittany will get married to Patrick. Hopefully, everything goes perfectly between them, and soon announce each other as husband and wife.

Brittany Matthews was born in the year 1995 in Tyler, Texas. Her birthday falls on 1st September, which makes her age 23. She has a tall height of 5 feet 9½ inches.

Brittany was born to her parents, Martin Scott Matthews and Diana Massey. She grew up with her brother named, Devin. She is close to her father, Martin, and keeps on uploading pictures with him.

Brittany went to Whitehouse High School in Whitehouse, Texas, where she played soccer. She was the captain during her senior year. She then attended the University of Texas. Brittany completed her graduation with Bachelor of Science degree in Kinesiology. She even played collegiate soccer at the University of Texas and was a forward for the college team.