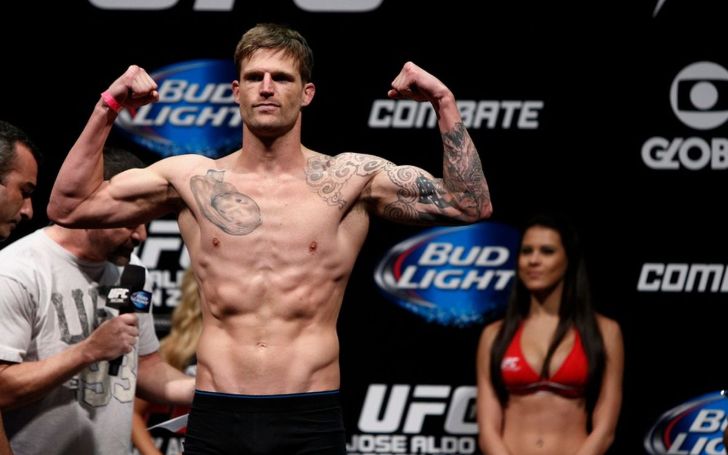 It is said that a woman has a significant role behind the success of a man. The important thing, however, is the continued support people like Bristol Marunde get from their life partners in spite of not much success.

Bristol is a mixed martial artist and a contractor who tried his hands in multiple ventures. As a result, he has a median professional success. So, what about his personal life? Who is his wife and does he share children with her?

Also, Know: Who is Kevin Lee?

Bristol Marunde is a married man and his wife is Aubrey Marunde. Aubrey is a television actress who is popular for hosting Flip or Flop Vegas along with her husband, Bristol.

The duo of Bristol and Aubrey exchanged the wedding vows on 24 May 2015 amidst a small ceremony in their own backyard. Before that, they had been dating for six years which means they knew one another very well by the time of their wedding. It also suggests that they started dating around 2009 and it has already been ten years since.

As of now, Bristol and his wife Aubrey are the parents of two kids. Both their children are sons, Kale Marunde and Kane Marunde who are three years apart in age.

There is no denying that even after a decade of their relationship, Aburey and her husband, Bristol share the same degree of love. In fact, they are head over heels in love with one another and they equally love their sweet and obedient sons. In most of the social media posts of both the duo, we can see that they share both of their photos and that of kids as well.

What is Bristol Marunde’s Net Worth?

As of 2019, Bristol Marunde holds an individual net worth of $3 million while his collective net worth with wife is $5 million. He earned his fortune basically from his career in mixed martial arts as a fighter and general contractor.

I'm excited for my fight promotion tomorrow! ReignFC fighters always bring it! Win, lose or draw I'm proud of the fighters who take the risk and challenge themselves.

Bristol was once a contestant on The Ultimate Fighter: Team Carwin vs. Team Nelson. In the international fight league, Bristol competed for the UFC, Strikeforce, M-1 Global, Titan FC, and Seattle Tiger Sharks.

Regarding his accomplishments, Bristol won ROTR Welterweight Championship once and he still holds the title. For defeated Ian Williams for the title on 6 April 2014. Likewise, he is also the one time winner of SCC Middleweight Championship.

Besides, Bristol is also the co-host of the television series, Flip or Flop Vegas with his real estate agent wife, Aubrey. The show premiered on 6 April 2017.

Bristol Marunde has a towering height of 6 feet 1 inch and he has a suitable weight of 77 Kg. Moreover, he has grey eyes and brown hair.

Where is the birthplace of Bristol Marunde?

Which nationality does Bristol Marunde belong to?

How tall is Bristol Marunde?

What color are the eyes of Bristol Marunde?

What is the hair color of Bristol Marunde?