Every Detail You’d Like To Know About AGT 2018 Semi-finalist Brian King Joseph: From His Dating Affair To Family 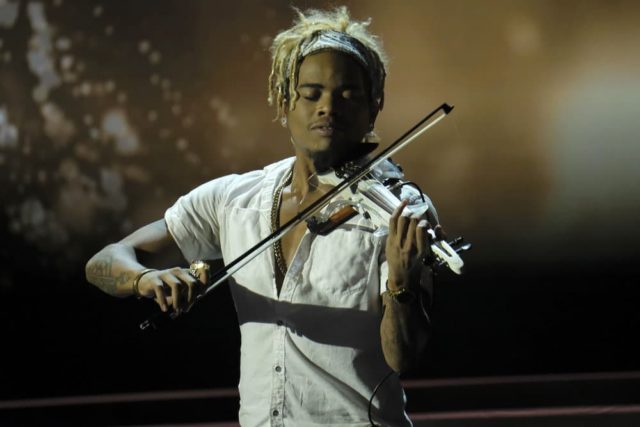 After auditions and live shows, America’s Got Talent has already selected its semifinalists with the votes tallied from the live quarter-finals. Among the seven semifinalists, the electronic violinist Brian King Joseph has been the absolute treasure so far. No doubt, Brian King Joseph bio is an inspiration to many.

Even in his auditions, Brian stole the show with his mind-blowing performance. However, underneath his smile, there is melancholy in his heart due to his poor health conditions. Despite going through so much pain, his alluring smile never leaves him alone.

It seems like the time has gone when struggling artists used to hide their love life for the stardom and female fan following. Unlike others, Brian has always been open about his relationship. Additionally, his girlfriend is the one behind his dynamic journey of the limelight.

Brian is dating his girlfriend, Kimmy Tan. They have been in a romantic relationship for about five years now. His girlfriend is a tattoo artist by profession. Other than that, they share a common interest in music and musical instruments.

Brian King Joseph girlfriend, Kimmy owns a YouTube channel which has amassed 317K subscribers till now. She posts videos of tattoos, music covers, and makeup on her channel.

Brian has collaborated with his girlfriend, Kimmy Tan, on her videos. She has uploaded a boyfriend does my makeup video too. Both of their Instagram has numerous couple photos of each other which reflect their chemistry.

As of now, Brian hasn’t married his girlfriend yet. Perhaps after AGT, the couple might be planning something big. Let’s wait and watch!

The passion and love for violin led Brian to audition for America’ Got Talent 2018. In the audition round, he played the song, “Lean On,” by Major Lazer & DJ Snake featuring MØ. His performance was full of energy and impeccable skills. He made the crowd stand on their feet cheering for him.

Judge Heidi Klum went on the stage and hugged him. He walked out with four definite yeses. If Brian wins the competition, he will get the money prize of $1.0 million which he is planning to spend to cure his medical condition.

Brian has also been a part of the hit TV show, MTV Real World, and many advertisements. He has been part of several bands in the Maryland area too. In 2012, he received a Full Presidential Scholarship at Berklee College of Music in Boston, Massachusetts.

Brian became the first winner of MTV’s competition, Cover of the Month. Mike Posner selected him after he got over 26 million likes within a month. He often performs at weddings, ribbon-cutting events, private parties, and club openings.

Brian King Joseph was born in 1991 in Washington D.C. Since he was four, he has been playing the violin. He grew up in a harsh neighborhood with his mother and sisters. Brian had to go through hard times while growing up. He was greatly influenced by his older sister who used to play the violin.

Despite all the hardships, he managed to go to Takoma Academy in Silver Spring, Maryland.

A few years back, Brian was diagnosed with a critical nerve disease known as neuropathy which would gradually take away the feeling from his hands and feet.

The talented violin artist celebrates his birthday on June 14 that makes his age 27. He is of Afro-American ethnicity.

Brian stands tall with decent height. He is active on YouTube, Instagram, and Twitter. He has gathered about 103K subscribers on YouTube channel. One of his videos titled electric violin remix of Fetty Wap’s “679” has around 1.4 million views. The hashtag #TeamKing is famous on his Instagram which has 57K followers.