Arkansas Coach Bret Bielema’s: Romantic Married Life With His Wife; Know His Baby Along With His Salary And Contract Details! 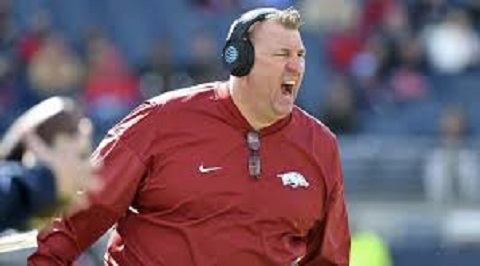 Most of us might be familiar with Arkansas Coach Bret Bielema’s professional life and his contribution in the football field. But, what about his personal life, Is he single or married anyone?

Bret Bielema was a head football coach at the University of Arkansas. Bret Bielema has proved himself as a great coach but is he a great husband to his wife? Who is the lady to wed Bielema? Let’s find out more about the dating history of Bielema with his wife and their married life:

Bielema and his wife enjoyed dating each other for four years. He proposed Jennifer on a cruise in March of 2011. Bret announced his engagement to girlfriend turned wife on 1st April 2011. After a year, they got married.

The groom wore a handsome black suit and the bride dazzled in her fascinating white gown. The wedding held in a private ceremony which became the most pleasant moment for the couple. The couple is doing great, and their relationship is in great shape.

The happiest moment to Arkansas coach, Bret arrived when he became a father to a baby. Bret announced his wife is pregnant via her Twitter in December 2016. And on 8th July 2017, Bret announced on Twitter that his wife, Jen, gave birth to their first baby; A girl whom they named Briella Nichole.

On August 9, 2017, Bielema brought his new baby daughter at his press conference. Bret Bielema even joked about his baby and said:

She does call the Hogs in her sleep

Bret is living a happy life with his wife Jen and his baby daughter, Briella. We hope he will be a great dad to his daughter and a great husband to his wife forever.

Romantic Dating History of Bret With His Girlfriend- Turned-Wife:

Hardworking Bret Bielema has a wild tale about how he met his wife, Jen. He met Jen for the first time at Wynn Casino in Las Vegas. Bret introduced himself as an MBA history professor hiding his real identity to Jen. Bret told Fox Sports Clay Travis about his first meeting with Jen:

“I always say ‘I have a good memory.’ I don’t know if I remember the opening line, but I remember the opening sequence. It was about eight years ago, I still had some game, brought some A-game. The thing I didn’t do or what I do. I was with some guys with Wisconsin, one of them might have had a [Wisconsin] shirt on. I told her I was an MBA history professor.”

After four months only Jen knew that Bret coached football. On the first night of their private dinner, Bret told Jen that he did not want to be without her in the future. Finally, Bret got down on his knees and proposed Jen.

It’s really heart-touching and full of romantic surprises. Jen is lucky to have such a husband in her life. She adores Bret too much and has expressed her feelings for him on her Twitter:

Born in the year 1970, Bret Bielema celebrates his birthday on 13th of January. According to his wiki, Bret Bielema is at the age of 48 now. Bret Bielema wife age is not revealed as of now.

Bielema hometown is Prophetstown, Illinois. Talking about Bret height, he seems to be more than 6 feet. But there is no exact information of Bret Bielema’s height.

He gained a Bachelor’s Degree in Marketing from the University of Iowa. Bret played for Milwaukee Mustangs which was a team in the Arena Football League.

According to Bret Bielema wiki, Bret served as a football head coach at the University of Wisconsin–Madison, from 2006 to 2012. Out of 18 games, Bret coached Wisconsin to win 17 games. On December 2012, Bret joined Arkansas Razorbacks. He was the highest-paid state employee in Arkansas.

Net Worth And Salary

However, Bret was fired after five seasons as Arkansas’s head after losing to the Missouri Tigers at home ground. More recently, he joined the football team, New England Patriots as an assistant.

At the age of 48, Bret has gained a lot of popularity and earns a huge salary per month. As an American college football coach, Bret has an estimated net worth of $8 million. Besides, talking about his salary, Bret Bielema used to receive $4.14 million.