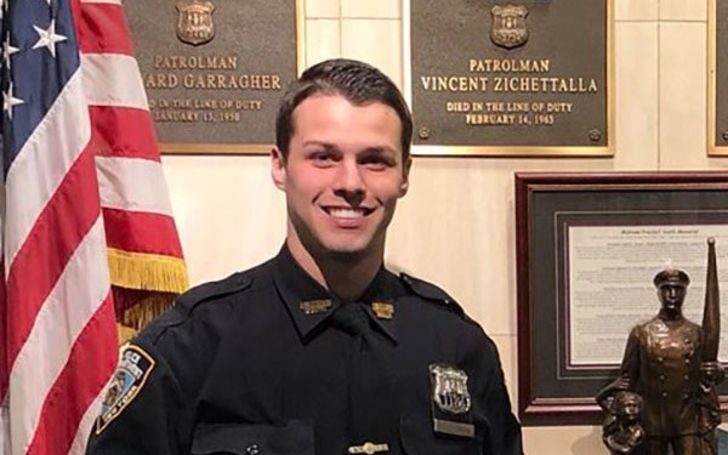 Who is Brendan McLoughlin? Today on this page, we will provide you guys the answer to this question.

Brendan McLoughlin, professionally, is a police officer who came to the spotlight after his marriage with the American country music singer and songwriter, Miranda Lambert.

You might get the idea from the above paragraph that Brendan McLoughlin is a married man who took marital vows with the famous personality from the music biz., Miranda Lambert.

According to the US Weekly, at 27, Brendan is eight years younger than his current wife, Miranda, with whom he married secretly. But before the pair got engaged, they were in a relationship with their former lovers. Brendan shares a child with his ex, Kaihla Rettinger.

Recommended: An amateur MMA fighter “Donshay White” died after he was ferociously revoked in the bout

Miranda and the American country music singer and television personality, Blake Shelton, were in a marital relationship that came to an end in 2015.

The country singer, Lambert, was reported to be in a relationship with R&B singer Andreson East which ended in April 2018. Later on, she also dated Evan Felker in February 2018 with whom she separated in August 2018.

Brendan McLoughlin became the topic of news after his connection with the music star, Miranda Lambert, because of which there are fewer details related to the personal life of the police officer, McLoughlin.

Mcloughlin was born at Staten Island, New York, the United States, in 1991. He is the son of James McLoughlin and Inova Valerio McLoughlin and has two siblings Jocelyn and Patrick McLoughlin, in his family.

Net Worth of Brendan McLoughlin

Talking about the fortune of Brendan McLoughlin, then from his profession as a police officer, he might’ve accumulated a net worth of $500,000 as of 2020.

As per the data of Payscale, an average police officer makes an income of $51,667 annually. Therefore, it isn’t surprising for him to make those numbers.

Even though Brendan has decent earnings, he is living a luxurious life after his marriage with the American country singer, Miranda. McLoughlin’s wife generated a massive net worth of $45 million from her successful career.

As stated above, Brenda McLoughlin’s soulmate, Miranda Lambert, is a millionaire, and together, the couples are settled in the south of Nashville on 400 acres of lush green farmland. Their house consists of rolling hills, rustic living spaces, and a massive horse barn.

If guys are in this line, then you might already know that Brendan McLoughlin created his career as a NYPD police officer.

In his past days, he even tried to make a career in the modeling field. He also showed off his six-pack abs in photos posted on the Model Mayhem in 2011.