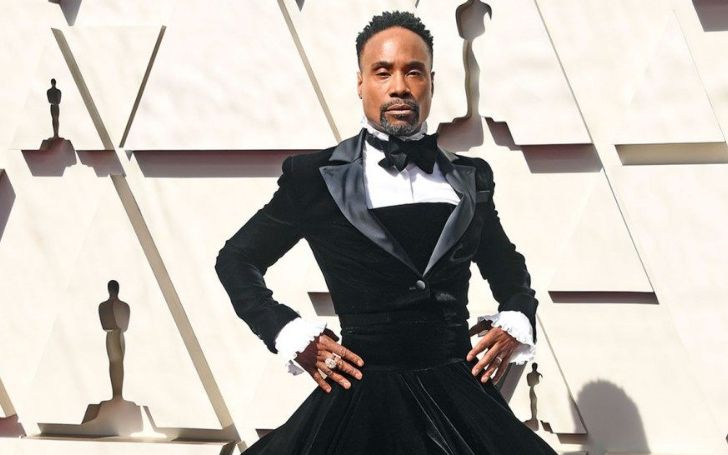 Pose Alum Billy Porter appears in the 2019 Oscars in a Tuxedo Dress.

The actor Billy Porter wears an epic Christian Siriano Tuxedo Dress at the 2019 Oscars tonight. His dress was, in itself, worthy of the Oscars. A jaw-dropping display, to say the least!

Porter showed up with a Velvety Tuxedo on the top while having a Ballgown at the bottom, instead of pants. Billy flaunted his artistic looks with white ruffled sleeves, black bow tie, and a ball gown.

When you come to the Oscars, you must dress up. Thanks @csiriano for creating this custom couture masterpiece. @oscarheyman you have outdone yourselves once again with your iconic jewels. Style by @sammyratelle / @rrrcreative Styling Associate: @ashleymarienyc Grooming by @heyannabee @TheAcademy #AcademyAwards2019 #oscars⁠ ⁠ #oscars2019⁠ ⁠

The 49 years old posted his full-length photo on his Instagram and stated,

When you come to the Oscars, you must dress up. Thanks, @csiriano for creating this custom couture masterpiece.

Siriano also reacted to the moment Porter wore the dress, “The most divine moment!”

During the 2019 Oscars, Porter was offered the hosting duties by ABC alongside Elaine Welteroth, Ashley Graham, and Maria Menounos. For his hosting duties, the actor changed into yet another tux, similarly inspired.

The second outfit also resembled the first tuxedo with ruffled sleeves, white shirt, and a black tie. While for his bottom part, it was as unique as it could have got. He wore a wide leg pant in place of his previous ballgown.

While many are in awe of the dress Billy Porter wore, many are questioning him about the dress. The dress held deep meaning for the performer.

I wanted to create a space where we can have a dialogue about the masculine and the feminine and everything in between.

A woman shows up in pants, and no one bats an eye.

Women wearing pants are powerful and masculine. while a man in a dress is, ehh, What is that?

The Grammy-winning star very well completed his hosting duties for the ABC telecast and yet, showed off his beliefs of equality.

Check out more about the 91st Rendition of Oscars! All the Stars From Best Dressed To Worst!