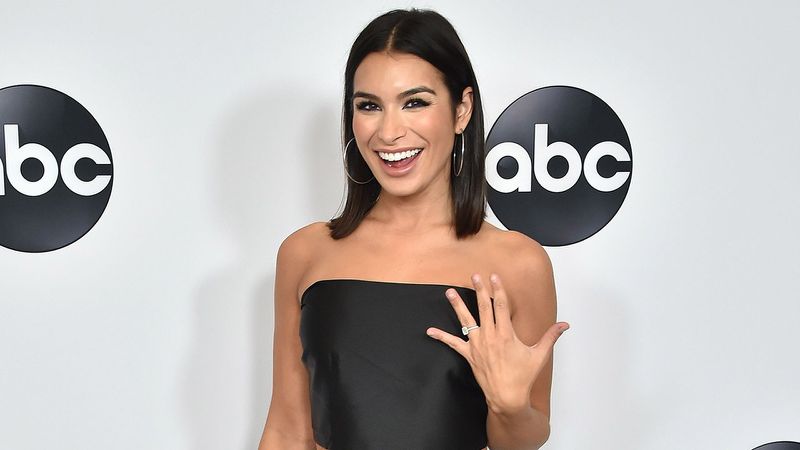 She ruled the title of Bachelor Winter Games with Kevin Wendt in 2018. No one could have ever thought that the pair would be separated and Ashley would be exchanging rings with the restaurant manager, Jared Haibon.  She was in buttercup yellow dress when Jared proposed her on his knees.

“You’d make me the happiest man alive if I got the opportunity to spend the rest of my life with you,” he continued, getting down on one knee and unveiling a gorgeous ring by Neil Lane. “So, Ashley, will you marry me?”

Ashley excitedly screamed yes, “You’re my soulmate, and I love you.”  At the time of the proposal, Ashley confronted that she had wanted to live together with him unless they were engaged. On a response, Jared opened up being a traditional s girlfriend, Ashley Iaconetti.

Well, finding a match is a hassle. She briefly dated Wells Adams on the third installment of Bachelor in Paradise. But the chemistry didn’t sparkle as she thought. In 2018, she won The Bachelor Winter Games with romantic partner Kevin Wendt. However, he accused Ashley of cheating with Jared Haibon where she kissed back Jared at the airport.

“Jared came out with his feelings, and he kissed me in the airport, We had mentioned this before, I admitted that I was dating Kevin and Jared kissed me. That is true. And whether you call that cheating, that is up to you, by most definitions it is. It was just one of those moments of passion. He pulled me in, and I kissed him back, yes, but I never kissed him again until Kevin and I broke up.”

She was born on March 6, 1988, in Great Falls, Virginia to the parents, D Jay Iaconetti. Hence, Ashley Iaconetti age is 30 years old. She grew up with Sister Lauren Iaconetti. Regarding Ashley Iaconetti education, she did schooling from Langley High School and James Madison University. Then, she attended Syracuse University and holds a masters degree in Broadcasting and Digital Journalism.

Apart from the popularity of television personality, Ashley Iaconetti is a correspondent for Access Hollywood and Clevver TV. Also, she co-hosts The Ben and Ashley I Almost Famous Podcast and the I Don’t Get It podcast.