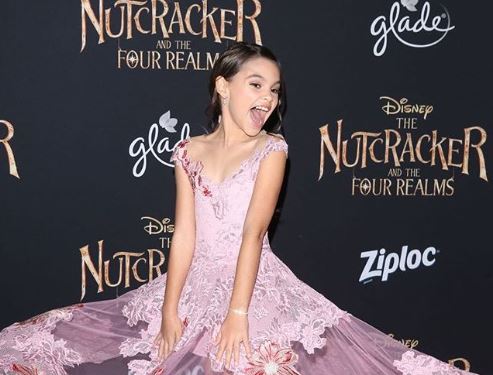 Success doesn’t depend on age or background; it needs your dedication, patience, and hard work. An 11-year-old American actress, Ariana Greenblatt hails such attribute.

At a young age, Ariana has successfully won the heart of millions of people through her stunning work. After appearing in the Marvel’s hit movie Avengers: Infinity War and as Daphne Diaz on the hit series Stuck in the Middle, she has grabbed global fame. She is currently competing on DWTS Junior 2018.

Born in the year 2007, Ariana Greenblatt is a young teen actress and dancer. The 11-year-old is a small package with of talent. She has baffled the film industry with her rare talent of acting. At a tender age, she was able to uplift her career in both acting and dancing.

As a star, Ariana came into prominence after landing the role of Daphne Diaz in Disney’s “Stuck In the Middle.” She played as the baby of the Diaz family. Her Instagram account has amassed over 1.3m followers.

The little star has a beautiful heart too. She often involves herself in volunteering activities and tries to cheer up the children who are suffering from bullying. She also gives them an inspirational speech to raise voice against bullying.

Also See: Gwyneth Paltrow: Engaged To Her Boyfriend After The Divorce With Her Ex-Husband

Furthermore, Ariana enjoys painting and makeup with her brother. She also practices gymnastics and dancing. Moreover, she loves animals and is involved in different animal shelters.

Her film credits include Avengers: Infinity War, A Bad Moms Christmas, Stuck in the Middle, and Liv and Maddie. She will also appear in the upcoming Disney’s The One and Only Ivan alongside Angelina Jolie and Bryan Cranston.

Besides, Ariana has an estimated net worth of $300k.

Ariana is currently competing on Dancing with the Stars Junior. She along with her partner Artyon Celestine, mentored by DWTS-Pro Brandon Armstrong, have already made it to the finale of the show. Joining them will be the other three pairs left: Mackenzie Ziegler with Sage Rosen, Miles Brown with Rylee Arnold, and Sky Brown with JT Church. Yes, you heard it right! Once again, DWTS traumatized innocent kids for dramatic purposes.

On Sunday night semi-final, Ariana and her partner, Artyon, took on a foxtrot in High School Musical’s “We’re All in This Together.” The pair scored 28 out of 30. As the episode had two routines, Ariana was teamed up with Sky Brown for her next performance. The duos performed on the song “369” by Rhett George, fusing Jive and Foxtrot dance styles. They also received 28 points out of 30.

Congratulations to all the final four contestants! But will Ariana be able to win DWTS Junior 2018?

Ariana Greenblatt was born in the New York, United States in 2007. Her birthday falls on 27th August, which makes her age 11. She belongs to Hispanic ethnicity.

Ariana was born in the family of Greenblatt to father, Shon, and mother, Soli Greenblatt. She has an older brother named, Gavin Greenblatt. Her brother is 12 years old, and she loves him tremendously.

They hardly fight with each other. As buddies, they often spend their free time together doing various entertainment activities. Ariana’s father, Shon manages her Instagram account with the handle @ariana_greenblatt.