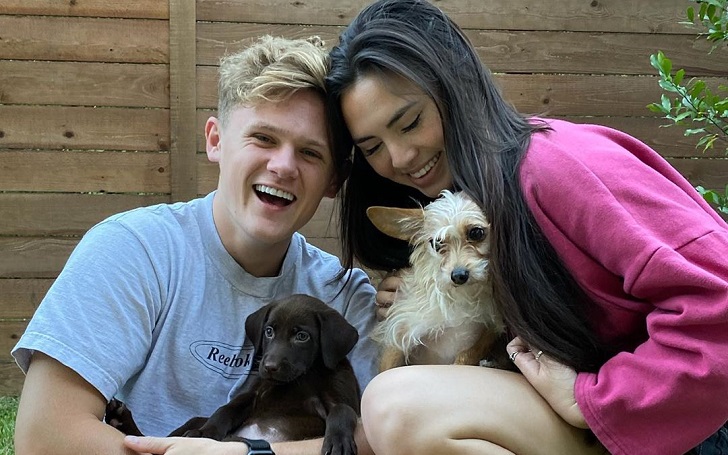 A popular thriving social media influencer with more than a million followers on social media, Ryan Trahan is an American YouTuber and young entrepreneur.

Trahan originally hails from Texas and returned to his hometown after he dropped out of college in Florida to pursue a full-time career in YouTube. And, recently in May 2020, Trahan became engaged to his long-term girlfriend. So, does that mean we will get to hear the wedding bell soon?

Youtuber Ryan Trahan surprised his fans in May that he popped the question to his girlfriend of more than a year, Haley Pham. Speaking of Pham, she is also a YouTuber & influencer with more than 1 million followers on Instagram.

Good for Trahan, Pham happily said yes to her boyfriend and accepted the engagement proposal. Both of the love birds took to Instagram to share the exciting news. And, whilst Trahan was 21, Haley was 19 when they got engaged.

Well, as of late May 2020, though Trahan and his future wife are excited to take their relationship to the next level, the couple is not married yet. But, considering the Vloggers’ lifestyle and choices, they will definitely share the news with their fans when their wedding happens.

Are They Officially Dating? Also, Know How They Met

The start of Ryan Trahan’s new beginning with his girlfriend turned fiancee is no less than a teen movie. Well, fate united these two when Haley has just moved into Texas. In fact, to Trahan’s neighborhood. As per reports from sources, the love birds first met in 2018.

Needless to say, being neighbors brought Trahan and Pham, who is of Asian origin together. And, in late 2018, Ryan and Haley realized their mutual feelings for each other and also confirmed their relationship to the public.

Trahan and his partner are both devout Catholics. Speaking of which, both of them are virgins. And, some of their fans believe that must be the reason for the couple to get engaged this quick at such a young age. What’s more! Ryan & his girlfriend live together at the same house they bought in 2019.