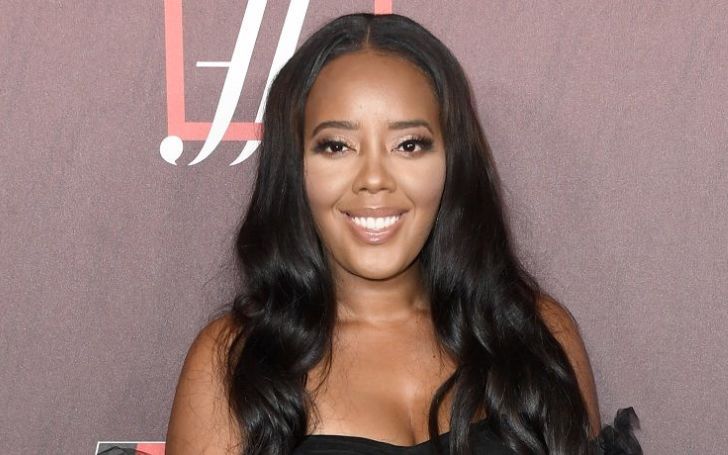 Angel Simmons is an American reality star and a businessperson, who gained breakthrough after her debut on American hit reality TV series, Run’s House. Subsequently, she gained stardom for her finest acting skills and as in now she’s featured on the covers of magazines, like ‘PYNK’, ‘JET’, ‘Kontrol’, ‘Honey’, ‘Rolling Out’, and forth. The stunning yet versatile personality is also known for her appearances on talk shows like ‘The Wendy Williams Show’, ‘Good Day New York’.

So let’s take a deeper dive into and learn some intriguing facts about the inspirational star.

Angela was born in Queens, New York, the U.S. from father, Joseph Simmons, and mother Valerie Vaughn in the year 1987. She holds an American nationality and belongs to mixed ethnicity. And her star sign is Virgo and is from a Christian family.

Her father Joseph was the co-founder of the popular group, Run-D.M.C. However, not much information about her mother is present on the internet.

During his early years, Simmons pursued his High School of Fashion Industries. and subsequently joined the Fashion Institute of Technology. However, due to her interest in business, she dropped out shortly after one year.

Moving on to her further education, she completed her bachelor’s degree in educational psychology and holds a master’s degree in counselor education with a concentration in student affairs from Mississippi State University.

How Angela Simmons become a businesswoman?

If we have a peek at her business career, Simmons started it working in an American reality television series called Run’s House along with her family members (might not seem related to her business career but sure has connection ahead).

Simmons with her partner and sister.
Image Source: Pinterest

The Television series first premiered on October 13th, 2005, which is a real-life based show on the family life of hip-hop mogul and former Run-D.M.C. rapper Joseph Simmons, aka Rev. Run.

Later in 2006, she got a chance to work as the editor of the mini-magazine ‘Angela’s Rundown’, which was a branch magazine of the leading magazine ‘Word Up!’

By then the TV show star was already a trending fashion magazine writer majorly for teenagers, where she used to write for the category of style, music, and more. She worked there for almost 6 years and stopped publishing in April 2012.

As she was always interested in fashion later she decided to study fashion and pursued a course at fashion college, and consequently launched a footwear line, ‘Pastry Footwear’, partnering with her older sister Vanessa. (so that’s how the dot connects)

And as her business ventures were molding to take good shapes, the versatile star eventually returned to reality shows which were from ‘Daddy’s Girls’ in 2009 with her older sister.

As success she was getting on all the sectors she stepped her foot in, she later decided to turn her fashion accessories to more modern form and approaches and opened an e-commerce website.

Over the time she was multi-tasking her career one as a fashion-inspired businesswoman and other featuring in numerous reality shows and television series, such as ‘Fashion News Live’ from 2008 to 2014), similarly, ‘Growing Up Hip Hop’ (2016), and ‘The Real’ (2016).

Who is Angela Simmons married to? Her Children and Past Affairs

Coming on the part of her personal life, dating, and marriage, Angela is yet to get married yet but the 32 years old was engaged with her long-term boyfriend, Sutton Joseph Tennyson back in 2016. They even shared a son named Joseph Tennyson born in September 2016.

Angela with her late fiancee and son.
Image Source: Getty

You May Like: Baylor Coach Steve Rodriguez’s Wife & Kids

Prior to her tragedy filled engagement with Sutton, she is known for dating Brandon Jennings in 2013, but withing few months of dating the couple decided to part their ways and broke up. Angela also holds a history of dating Romeo Miller in 2012 and Mille Cam Newton before him in 2011.

How much is Angela Simmons’s net worth?

As the occupation of businesswoman, Simmon has made her self with a good fortune and lifestyle. Based on some of the reputed media outlet Cheat Sheet, Angela Simmons’s net worth is estimated to be around $7.5 million as of 2020. However, her salary, earnings, and luxurious asset details are not made available.

What is the Height, Weight, Shoes Size, and Facial Features of Angela Simmons?

The gorgeous and brilliant businesswomen Angela towers an idle height of 5 feet 5 inches with a weight near to 50 Kg.

Coming on her facial features she shares a dark brown eye and black hair. Angela show size is 6 (US) with a body measurement of 34-27-37 inches.

We hope you enjoyed the article, stay tuned for more Biographies on The Celebs Closet.