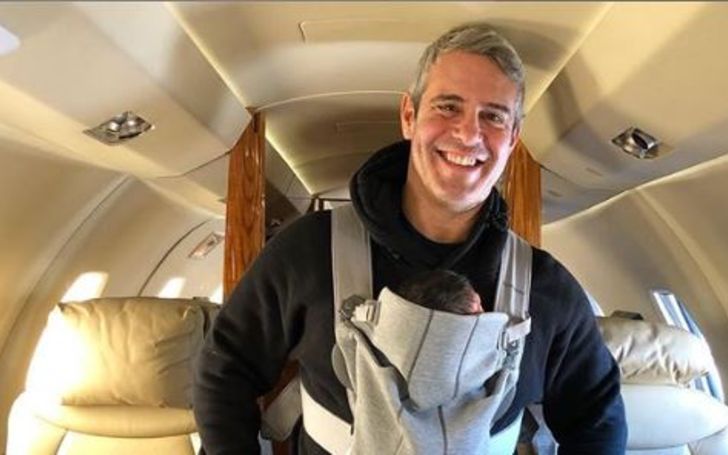 Benjamin Allen Cohen gets into his first flight but his dad, Andy Cohen gets slammed for bringing the little boy in the high skies.

The new dad, Andy Cohen recently on Saturday, February 9, 2019, saw a rise to his fans criticism after he posted a photo of him and his newborn son on a private jet.

Welcome to parentwood! A Golden Gay star took a photo of himself with his newborn son Friday, which some of his followers create issue with.

Cohen’s surrogate gave birth in Los Angeles, thus the Bravo host is likely making the trip back to New York City, his residence.

At the same time, some Instagram users judged it too early with a newborn.

With over 3 million fans looking at this photo, a number of fans were quick to slam the Watch What Happens Live host for taking his son for a flight too early. One fan said,

So happy for Andy. Having said that, a week old baby shouldn’t be flying and that baby should be swaddled. No little legs flopping around in the wind.

A number of his other fans, however, defended the host. One of them said,

lol, there’s not one single rule about newborns not being able to fly. How the hell do you people expect him to get his kid back home?

Similar to this one, another fan wrote,

from California to New York by road? …..you think that’s safer than a quick flight

Whatever be the case, Andy stands tall with his new bundle of joy and is unaffected by the comments he has received.

Thanks to Cohen’s famous friends, who were able to even out his comments section.

The Bravo TV host Andy Cohen announced with an Instagram pic that he has finally become a dad. A surrogate gave birth to his son, Benjamin Allen Cohen on Monday, February 4, 2019, in Los Angeles.

Cohen posted a picture of him holding his new bundle of joy on his Instagram with some details about the baby.

Andy also revealed that his son got the name of Cohen’s grandfather Ben Allen and that, he is grateful to the incredible surrogate.

The news of Andy becoming a dad via surrogacy was already announced in December 2018 in his show, Watch What Happens Live.