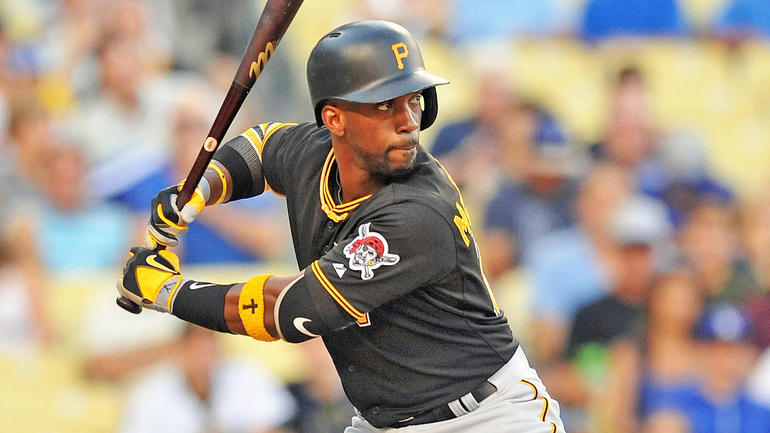 Popular for his exceptional performance and dreadlocks, Andrew McCutchen is an American professional baseball outfielder for the San Francisco Giants of Major League Baseball (MLB). He is also known with the nickname “Cutch’’ and as the former player of the Pittsburgh Pirates.

The Pirates drafted him in the first round (11th overall) of the 2005 MLB draft and debuted him in MLB in 2009. Well, if his career is this glorious, it is evident for his fans to wonder about Andrew McCutchen married life. The 2013 NL Most Valuable Player Andrew McCutchen net worth is also jaw-dropping. But more importantly, who is Andrew McCutchen wife?

Similar to his professional triumphs, Andrew McCutchen married life is something to praise about. Since the foundation of his career, his future wife has always mounted by his side in every situation of his life.

Andrew McCutchen began dating his wife, Maria Hanslovan in 2009. Being someone who doesn’t hesitate to flaunt his love, he popped the question in The Ellen DeGeneres Show on December 11, 2013, to his wife, Maria.

After a few months, he and his wife got married in 2014. Nothing much has altered, he still leaves no chance behind to showcase his love for his wife on his Instagram.

Wow! It’s incredible that 3 years have gone by already! It has been the 3 best years of my life. Being with you keeps getting better and better.Happy anniversary!!!! I love you @mariamccutchen

The day of November 27, 2017, must have been the best day of Andrew life as he promoted himself to a father. On the very day, together with his wife, he welcomed their first child named Steel Stefan McCutchen who completed their family.

Happy Father’s day! It’s my first one and man do I love it! pic.twitter.com/qEGC0UC1tf

As of now, Andrew is giving his finest to be the world’ best husband and father and is making his family happy. Looking at his married life, one thing that we are sure of is that life is beautiful with someone special on our side.

Andrew McCutchen Net Worth and Salary

Delving Andrew McCutchen net worth, the player used to receive an average salary of over $8 million from Pittsburgh Pirates. Presently, from San Francisco Giants, he earns over $12 million annual salaries as a right fielder.

On March 5, 2012, Andrew signed $51.5 million worth contract extension with the Pirates. He is also involved in endorsements and advertisements which are the other secondary source of his net worth.

He has won National League Most Valuable Player Award and Silver Slugger Award for four times. But what’s the figure of Andrew McCutchen net worth?

Andrew McCutchen began his professional baseball career on June 3, 2009, playing for the Pittsburgh Pirates. After Pirates traded their starting center fielder Nate McLouth to the Atlanta Braves, they called him up for the major leagues for the first time.

His debut match was against the New York Mets as center field and batting leadoff. On June 17, 2009, Andrew hit his first career home run off of Francisco Liriano of the Minnesota Twins, a two-run shot in the third inning.

On April 29, 2015, he recorded his 1000th career hit in the match against Chicago Cubs. He played a total 676 for the Pirates with tons of PNC Park records.

Humbled to have played ball with
these #FutureStars at the @chevrolet Youth Baseball clinic. #ChevyBaseball #Sponsored pic.twitter.com/wZ4FOLUBXt

Moreover, on January 15, 2018, Pittsburgh Pirates traded Andrew to the San Francisco Giants, in exchange for Kyle Crick, Bryan Reynolds and $500,000 of international bonus slot money. On April 7, 2018, he had six hits in a game against the Los Angeles Dodgers for the first time in his career with his final run being a three-run walk-off homer.

Andrew Stefan McCutchen was born in 1986 in Fort Meade, Florida to his parents Lorenzo Mccutchen and Petrina Swan. His father played football as a running back for Carson-Newman University.

However, his father gave up his NFL career and went back to Florida to be with his family in 1989. His mother finally married his father in 1992 only after his father became a church minister.

He grew up along with his sister named Loren. He signed with the University of Florida but later began his professional career with the Pirates instead of going to Florida.

The 31 years old Andrew’ birthday falls on October 10. He belongs to Afro-American ethnicity.

The physically fit baseball player Andrew who is famous for his dreadlocks has a height of 5 feet and 10 inches. On his Instagram account, he has more than 133k followers, and Twitter has about 983k followers.

The baseball outfielder, Andrew McCutchen has an impressive fan following. Her amazing sportsmanship helps him to grab huge followings.