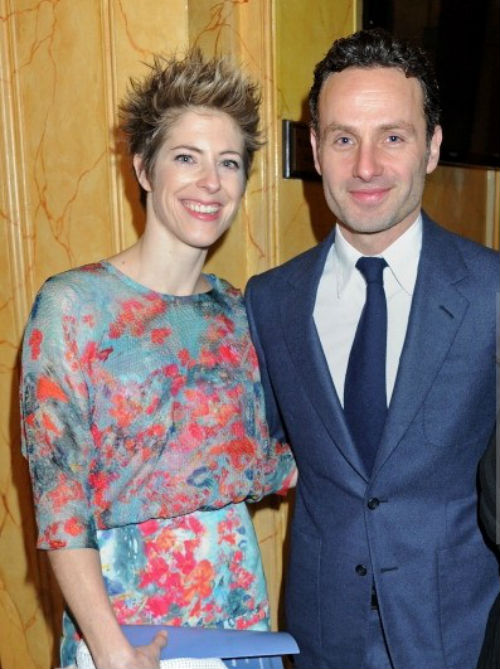 With the increasing fame in the life of celebrities, their spouses and children are also into the buzz. People often follow their favorite star’s personal life. While talking about the popularity of their spouses, Andrew Lincoln who depicted Rick Grimes in the horror series The Walking Dead brought his wife, Gael Anderson into the limelight as well.

The love story of Gael and Andrew is inspiring and romantic as ever. Let’s get to know more about Andrew Lincoln’s wife, Gael Anderson’s married life, children, net worth, age, bio, career, and wiki!

Gael Anderson Married Life with Her Husband and Children

Gael Anderson first met her future husband, Andrew Lincoln in 2001 on the set of TV series Teachers. Her now-husband, Andrew fell in love with Gael at his first sight. Andrew saw her while she was serving tea to the staffs as she was one of the crew members in the set of the show.

While speaking about their love, Gael Anderson’s partner Andrew Lincoln stated in an interview,

I saw someone that I just fell for, it was amazing, You can’t really quantify or explain emotions. It’s part of my business, sure, but when it’s the real deal.

Despite falling in love with his wife at the first sight, Lincoln thinks his love life is ordinary. In short, Andrew met his wife, spent time together with her, proposed her and then got married and had children to start their own family. Like we said, that’s still just an ordinary love story for Andrew and his wife Gael.

In a while after their first encounter, the pair began dating, and after dating for four years, Gael Anderson ultimately married her boyfriend, Andrew Lincoln. Their special and big day occured on 10 June 2006 when they exchanged tehir marital vows. Some of the notorious actress and singers were the highlights of the wedding ceremony.

Anderson and her husband, Andrew welcomed their daughter, Matilda Clutterbuck in 2007. After three years of their married lfie, her son named Arthur Clutterbuck was born. The couple hasn’t disclosed much about their children as they are very protective parents, condisering their status as a celebrity.

The secret behind their decade-long marriage is their abundant love and respect for each other. In their spare time, they often go on family trips and spend some quality time with their family of four.

Gael is living happily and relishes her married life with her husband and children. There are no rumors about the couple getting divorced.

Andrew Lincoln is notable for his roles in the BBC drama This Life, Channel 4 sitcom Teachers, and Christmas-themed romantic comedy film, ‘Love Actually.’

The British actor, Andrew won Golden Nymph Award as an Outstanding Actor in Drama Series in 2007. Similarly, in 2010, he was awarded Best TV hero Award at the IGN Summer Movie Award. Additionally, he also collected the Satellite Awards in 2012, for the Best Ensemble – Television (Special Achievement Award).

Concerning Gael Anderson’s net worth, she hasn’t yet revealed about it. As she came into news only after marrying Andrew, her net worth isn’t much from her own career. Anderson, however, is estimated to have a net worth of $100,000.

However, her husband Andrew Lincoln’s net worth is estimated to be $16 million. He makes an annual salary of $650k per episode from the TV series, The Walking Dead. When it comes to Geal, she definitely might have an estimated net worth of $200 thousand.

Gael was born in 1970. Her exact birthday is inaccessible as she seems to choose massive secrecy in her personal life. She was born to a British musician and songwriter, Ian Anderson who is currently 71 years old. Gael’s father was from Scotland and was the member of famous British rock band Jethro Tull.

He is also recognized for his several instrumental skills in his rock band and for his exceptional style of playing the flute. He has also been introduced on multiple soundtracks and is also a songwriter. She attended Downe House School.

Her mother’s name is Shona Learoyd, the second wife of Ian. Her parents got married in 1976. They currently live with Gael. James Duncan Anderson who is also a musician is her brother. He has played on his father’s band Jethro Tall and also has his own Hole Agency which signifies various artists.

Gael Anderson used to work as a crew member in various movies and tv series. She is currently helping her husband in his career and his family.

Stay tuned to find out all about your other favorite celebrities on TheCelebsCloset.