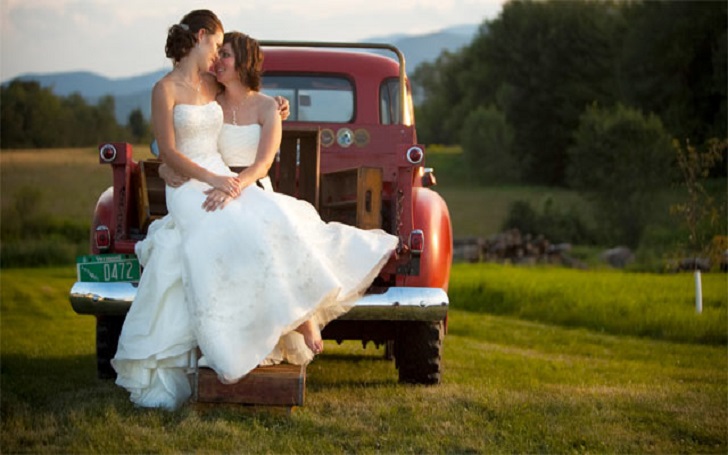 Only a few people have the courage to go against society and marry the same sex. Amy Walter is also one of them who married her longtime lesbian partner in an intimate wedding. She married her partner in that circumstance when same-sex marriage was illegal.

Let’s find out who is her lesbian partner and how romantically did the couple tied the knot.

In 2013, Amy Walter married again to her lesbian girlfriend of a long time Kathryn Hamm in an intimate wedding ceremony. Amy has not hesitated to say that she is a lesbian and also she married a girl, even when same-sex marriage was not legalized.

”My partner, Amy, and I felt that we had tied the knot exceptionally well the first time and, because we live in the Commonwealth of Virginia, which bans same-sex marriage, we didn’t believe that marriage equality would be coming our way at any time in the foreseeable future. Until this past summer.”

Their first marriage was in 1995, and after the wedding, they moved to Clarendon. During their second marriage, Kathryn Hamm explains that”

“We did it on a Saturday morning at the courthouse, then walked a few blocks for a delicious barbecue lunch. I think Amy summarized it best during a toast. For our  marriage ceremony, there were more wrinkles, more gray hair and more kids!”

Adopted baby of the lesbian couple!

Amy and Kathryn adopted a son, Caleb, in 2006. These lesbian couple is fully enjoying their parenthood with their son Caleb. Amy who is also active on various social networking sites often likes to post about her kids and their good time and memories. Her tweeter feeds regarding her son say it all how much of loving and caring mom she is;

My kid: mom, you wanna play superheroes fight?
Me: sure *makes moves, sounds of fighting*
Kid: how about w/out sound effects #kidsplained

Some of the quoted  published by Amy Walter in media are:

“The only problem with the “children of Reagan” line is it reminds you that Marco Rubio is the young candidate.”

“Usually, you do a shakeup because you know that you have a problem or your gaps and you’re going to fill those gaps.”

“I still think there’s some tension. But it’s pretty clear that, when the president made his statements as a candidate, he’s following through with those as a president.”

“The ones who are in the Senate have to have a position.”

Amy Walter was born in 1969 in Virginia US. She is currently 49 yrs old. Her ethnicity is American by birth. She completed her graduation from” Colby college” in the bachelor of arts.

Katherine started a site Gayweeding.com, where we can find more about their wedding. It is assumed that their life is going as smooth as possible.

Amy had decades of experience in journalism, there is no estimated net worth of Amy, but we can say that she is earning a hefty amount form her work as a journalist.