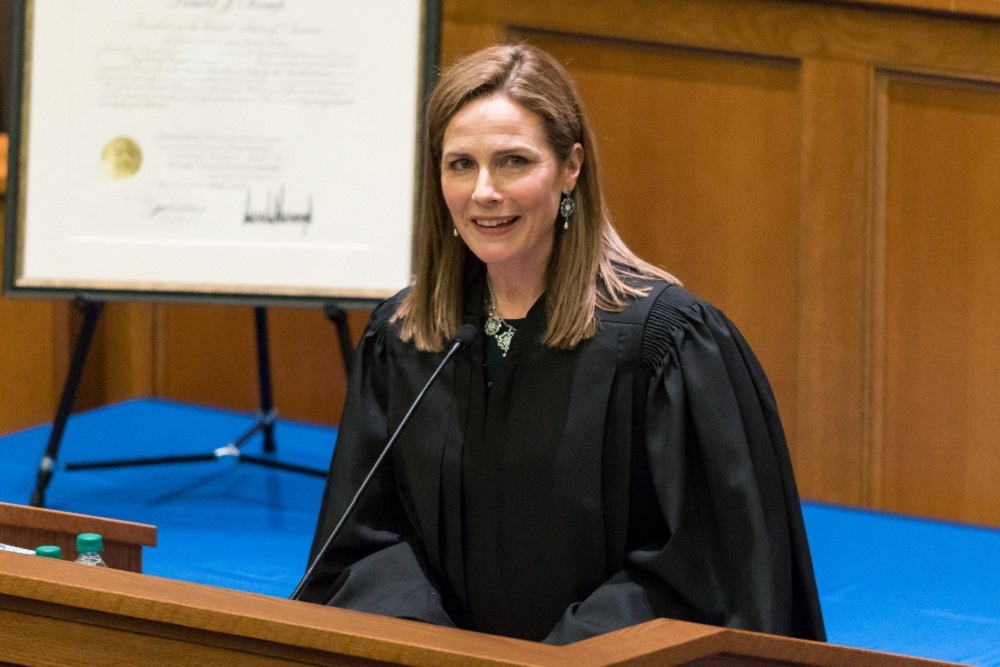 Amy Coney Barrett, who previously was a professor of law at Notre Dame Law School, is a United States Circuit Judge of the United States Court of Appeals for the Seventh Circuit. She is among President Donald Trump’s list of potential Supreme court nominees since 2017.

Amy Coney Barrett Married? Who is her Husband? Know her Married Life

Read More: Judge Jeanine Pirro: Married Someone After The Divorce With Her Ex-Husband?

While surfing around Jesse M. Barrett’s LinkedIn account, it revealed that he is a prosecutor in the South Bend, Indiana area.

Amy has often seen praising and expressing how deeply is she in love with her husband. She often praises her husband and claims that her husband is serving the country and is extremely proud of him. She explained:

I hit the jackpot when I married Jesse.

The above statement clearly reflects that Amy Coney Barrett’s married life with husband Jesse is going strong and is deeply and madly in love with each other.

Amy Barrett taking the oath of office at her investiture ceremony. Husband Jesse Barrett is standing next to her.

Keeping almost all personal information out of the limelight, Barrett is having a healthy relationship with husband Jesse.

Just like Amy Coney Barrett, married life is out of the limelight, she also tries to keep information about her children hidden.

However, during the confirmation heard in the federal branch, Barrett revealed about the length of her family. Amy along with her husband was talking about their three oldest daughters among their seven children. She explained that her 16 years old Emma is the first apple of their eyes. Then, she mentioned about 13 years old Vivian and explained Vivian as their miracle. Vivian who was born in Haiti joined the family.

Likewise, another child, Tess, is also 13 years who now studies in 8th grade with Vivian. Amy explained that Tess is one of the most compassionate and determined people that she ever knew.

During the confirmation of Amy Coney Barrett’s children, she revealed that she along with her husband are always ready to fulfill the needs of children. Amy then revealed that the pair also had welcomed another child born in Haiti.

At the moment, Amy Coney Barrett lives a blissful married life with no rumors of divorce and separation issues. And the family of nine live a healthy familial life.