Is Alisson Becker Married or Dating Someone? Know his Married Life, Net Worth, Earnings, and Contracts 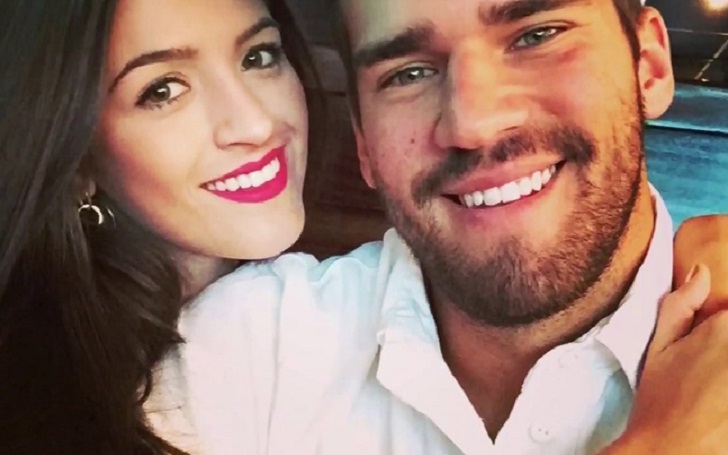 Before A. S Roma, he served as a goalkeeper for the club, Internacional. Alisson wears jersey number 1 and is one of the best goalkeepers from all over the world. Well, you might be familiar with Alisson Becker’s professional career, but how many of you are familiar with his personal life? So, did Alisson Becker marry or is still single? Know everything below:

Goalkeeper Alisson Becker recently is all over the headlines after he signed and completed the formalities at Melwood training ground, before signing a long-term deal with Liverpool FC.

It’s not only the huge step in Alisson’s career but also a massive chance and moment for his wife, Natalia Loewe. She could be joining him in the UK.

Alisson Becker is off the market and is living happily with wife Natalia Loewe. The couple first met when Loewe was studying to become a doctor. The pair first met in 2012 and during that time, he was playing for Internacional in Brazil, and they soon fell in love.

Right after the first meet, the couple fell in love with each other and soon dated. Alisson Becker married Natalia Loewe on June 22, 2015, after enjoying a dating relationship for around three years. In one of the interviews, Alisson revealed that her wife Loewe left Brazil for about five months after graduating just to be with him.

Alisson added that he enjoyed supporting her while his wife was completing the studies at university.

Despite the couple belongs to two different professions; doctor and footballer, it looks like it does not bother them at all. Love, support, and care are what made their relationship much stronger and smoother.

At the moment, it’s been almost three years that Alisson Becker married Natalia Loewe and is living a blissful married life without any rumors of divorce and separation issues. Though the couple is quite busy with their professional career, have managed to spend quality time together.

Reportedly, Loewe is all set to join her husband in the Merseyside City. Previously, she hesitates to leave Rome where their first child, daughter, was born.

Talking about Alisson Becker and Natalia Loewe’s children, the couple has a blessing in the form of a child. Alisson and Natalia welcomed their first child, a daughter, in April last year. The pair named their daughter as Helena. The couple often posts pictures of their daughter on social media.

Sources claim that Loewe had a chat with Roberto Firmino’s wife Larissa Pereira to discuss the move. And now, Loewe claims that the discussion has made her easier to move on.

Alisson Becker’s Net Worth and Salary

Alisson Becker, as one of the most expensive goalkeepers of all the time, has made everyone curious about his net worth. Becker signed a contract with Liverpool for a whopping cost of £67million.

The Brazilian player claimed that he was thrilled and signing a contract and being with Liverpool is like a dream come true. He said:

It’s a dream come true to wear such a prestigious shirt for a club of this size that is used to always winning.

Furthermore, he claimed that signing Liverpool is a huge step for him. The 26 years old goalkeeper is one of the most expensive goalkeepers of all the time signing a whopping contract of £67million, equivalent to almost $89 million. So, what is the figure of Alisson Becker net worth?

As of now, Alisson Becker holds an estimated net worth of $3.8 million including his assets. In the same way, he earns $2.8 million yearly for presenting his club. No doubt, he is earning a decent amount of money from his professional football career, endorsement, advertisements, and sponsorship.