Home Entertainment Alex Honnold Married Fellow Climber; Who is She?

Alex Honnold Married Fellow Climber; Who is She? 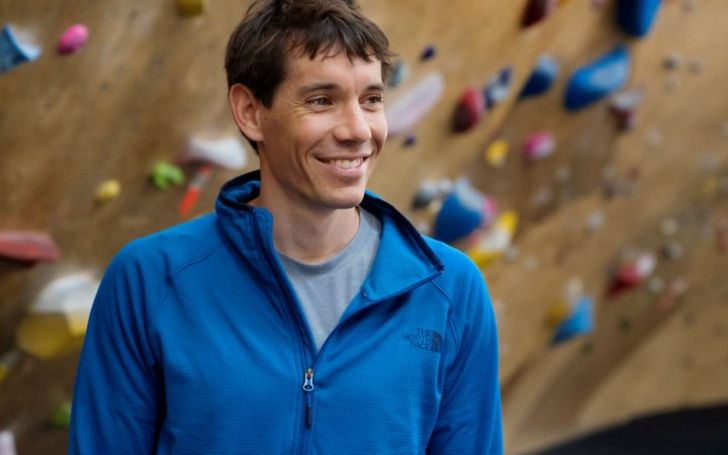 If you are an adventure lover, then you must have heard the name, Alex Honnold. Alex is a rock climber by profession and the first to free solo climb the EI Capitan in Yosemite National Park.

The professional rock climber became the hot topic when he climbed up 3000 feet Ei Capitan without using any rope all by himself. Alex’s followers might be wondering about his private life as well. Here, we provide you more information on his married life and so on.

Alex Honnold recently shared his joy on his socials, Instagram and Facebook after he received a positive response to his marriage proposal. The enthusiastic climbers’ future wife is none other than Cassandra Mccandless popularly known as Sanni Mccandless, a rock climber, and a life coach.

Moving on to their fairytale love story, the couple shares a theatrical experience about their first meeting. It was back in 2015 at an event for Honnold’s’ book, Alone on the Wall that Sanni left her number to the man that looked honest, simple and cute.

After their first date, the fearless pair started a climbing trip together to Switzerland which added more romance and a strong bond between the duo. Although the romantic pair went through some ups and downs, having one another made their lives easier and better in every way and kept them together.

Sanni, the crime partner of Alex had spotlight as they appeared in the national geography documentary. Ever since the pair did their best to keep promises and stay committed to each other. They appeared together on screen in the documentary Free Solo.

2019 was “the” year for the duo as they have decided to take their relationship a step further. Alex proposed and Sanni said Yes, what more do you need?

Alex, born on August 17, 1985, is best recognized as the only person to climb the EI Captain in Yosemite National Park.

Honnold began his climbing career through his early age of 5 in the climbing gym and increased his level by the age of 10. As a kid, he was just an average climber, not the best not the bad. Honnold says he got better at climbing through his daily work and practice.

His love for rock climbing grew more and more. During his teenage, he participated in various national and international youth championships.

The 34 years old climber received fame when he accomplished the free-soloing Yosemite’s Astroman and The Rostrum in under a day in 2007. The following year, he free soloed the Moonlight Buttress route in Zion National Park in Utah.

In 2008, Alex free soloed the Regular Northwest Face of Half Dome (2000 ft) which was featured in the film, Alone on the Wall (2010). Because of the movie, Alex began gaining prominence and soon, became a celebrity.

Honnold then in June 2012, kept the record on the Nose route of Yosemite’s EI Captain by 2:23:46. The record was set by Honnold and his fellow climber. Then the ambitious climber kept on moving to achieve more and more of his dream until he made history in 2017.

Ever since the enthusiastic soul met Caldwell and Jorgeson, the idea of free solo climbing hit his mind in 2015. The quint of thirst to conquer the top of the EI Capitan beat his fear of injury, most probably death. After a long and keen observation, he prepared and went on to reach the top ropeless.

The free soul made a historic achievement when he reached the top of the 3000 feet high El Capitan in the Yosemite Valley. In 2017, he turned his dream into reality!

After the great achievement of free solo, the story was shared onscreen through a documentary film. The documentary is based on all his free solo where Sanni, his girlfriend shared the on-screen romance. Free solo premiered at Telluride Film Festival on August 31, 2018. The film received numerous positive reviews and won many awards which include Best Documentary Feature at the 91st Academy Award.

In addition to his rock climbing profession, he also acted in several movies that present more of his climbing life. The films that he played are The Sharp End, Progression, Alone on the Wall, Honnold 3.0 and so on.

Honnold, in addition, has won awards like Golden Piton Award from Climbing Magazine, Robert and Miriam Underhill Award from American Alpine Club and a special mention for his outstanding contribution to climbing.

The Net Worth of Alex Honnold

One of the highest-paid rock climbers, Alex holds an average sum of $1.5 million as his net worth and most of this came from rock climbing.

Alex’s Free Solo documentary made the gross collection of $28 million at the box office and won many awards for which we can assume he was paid as well. Besides, he’s held sponsorship with companies such as The North Face, Clif Bar, Maxim Ropes, and Black Diamond. He owns a house at Las Vegas, Nevada that he bought in 2017.