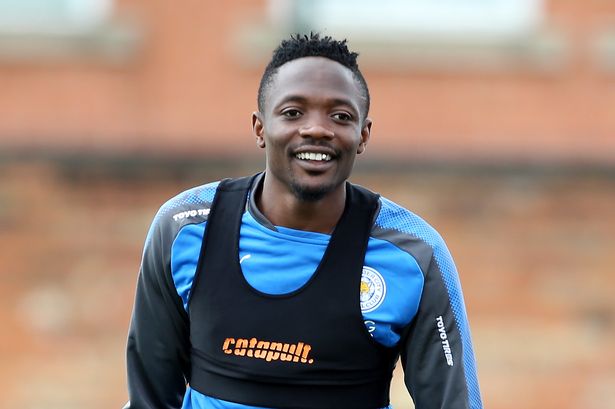 Nigeria National Football Team is doing great in FIFA World Cup 2018. Especially, Ahmed Musa, who plays as a forward and left winger, Ahmed Musa as he scored twice against Iceland in the group stage. He is also the first Nigerian to score more than once in a FIFA World Cup match after scoring a brace against Argentina in the 2014 FIFA World Cup. People are quite excited to learn about Ahmed Musa bio along with his professional career and net worth.

Ahmed Musa is currently married to his wife, Juliet Ejue. They tied the knot in the year 2017. During an interview with Complete Sports, Musa told:

“Marriage is not new to me but I believe it was a right move to make when I did. The past remains in the past. I’m happy now and I think well and I can focus on my game which suffered a bit.”

The couple also shares cute pictures on their social media. Regarding their plans of having children, the duo has not commented a single word.

Before Juliet, Musa was previously married to Jamila Musa. It was reported that Juliet was the reason for their separation. He also once got into legal trouble with the British law when he was arrested for domestic violence for allegedly beating his ex-wife, Jamila.

How much is Ahmed Musa Net worth?

Musa is currently enjoying a lavish lifestyle in his hometown of Jos in Nigeria and London Home. He has some luxurious cars like Honda, Range Rover, etc. He has also set up a petrol station as well a fitness sports center and has spent millions of dollars building a magnificent mansion in his hometown of Jos, Nigeria. No doubt, Ahmed Musa net worth is in millions.

But what’s the figure of Ahmed Musa net worth?

Musa achieved massive success at the Nigerian clubs. He later transferred to Eredivisie division team, VVV-Venlo in 2010. On 30th October, he made his debut for the team against FC Groningen. During his time with the Dutch club, Musa achieved the award for AIT Football player of the year in Nigeria.

Caption: Musa scoring a goal against Iceland in the 2018 World Cup

Musa’s impressive football skills attracted the teams of Europe such as Totten ham Hotspur and Ajax FC. But in January 2012, he signed with the Russian club, CSKA Moscow instead. He scored freely at CSKA Moscow and was a top goal scorer.

Leicester City signed Musa in 2016 for club record transfer fee of $ 23.5 million. On 13th August 2016, he made his premier league debut against Hull City and scored his first goal for premier league side against Crystal Palace on 22 October 2016.

Right now, Musa is with his former Russian club, CSKA Moscow on loan from Leicester City whom he signed during January 2018 for the 2017-18 season.

Musa has represented Nigeria in the FIFA U-20 World Cup held at Colombia in 2011 where he scored three goals in the tournament. He was among the crucial players that helped Nigeria to win 2013 African Cup of Nation. He has also played at FIFA World Cup 2014 and scored two goals against Argentina.

In 1992, Ahmed Musa was born in Jos, Nigeria. He celebrates his birthday on October 14th. He was born to Nigerian mother, Sarah Moses.

Musa lost his father at a very young age. He also has four sisters in his family. He is Nigerian and belongs to the black ethnicity.

As of now, Musa is 25 years old. His zodiac sign is Libra. Musa has an athletic body with a height of 5 feet 8 inches.