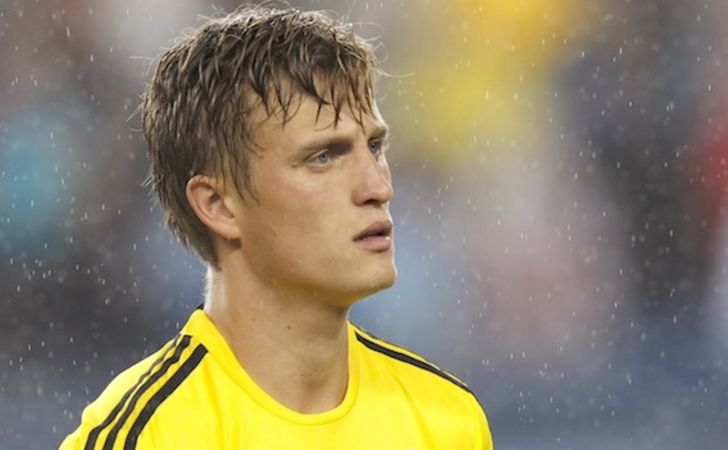 The game of soccer is the most popular sport out of all, and this is an excellent platform for thousands of individuals to make a name for themselves. Aaron Schoenfeld is one of them as a former MLS star who currently plays at the Israeli Maccabi Tel Aviv.

The Tel Aviv footballer is a talented player who gained massive fans while spending about six years in Major League Soccer. Likewise, he got significant limelight as he quit the national league to join the Israeli club, Hapoel Tel Aviv.

Schoenfeld and Abby Dahlkemper: Match Made in Football

The Tel Aviv striker is currently dating fellow football player, Abby Dahlkemper. Similar to his success, his girlfriend is also a well-accomplished footballer who plays for North Carolina Courage and in the United States women’s national team.

The footballing duo revealed their relationship on June 16, 2019, when Schoenfeld went to support his girlfriend, Dahlkemper in the Women’s World cup in Paris.

The soccer stars are quite open regarding their relationship since they tend to post about their day to day affairs and dates on their respective social media handles.

The Tel Aviv footballer owns an estimated value of $1 million as his net worth. With about 81 appearances and 19 goals in the MLS, the star signed for Champions League playing Maccabi Tel Aviv.

The American-Israeli forward not just owns a whopping net worth from his well-accomplished football career but also gathers a massive fan-following.

Schoenfeld is quite successful to prove his abilities at the very top level, no matter which sides he played for.

The 29-year-old spent about five years in MLS playing for teams like Portland Phoenix and Columbus Crew. Furthermore, he also spent a year at Dayton Dutch Lions in a loan spell during 2014.

Speaking in numbers, the forward debuted from Portland and scored 2 goals in fifteen appearances. Likewise, he spent most of his career in his next club, Columbus Crew SC, playing 51 games and scoring 5 goals. With a shaky spell at the club, he went to Dayton Dutch Lions to get back on form.

Schoenfeld impressively revived his form after scoring 12 goals in 18 matches at that spell. During that particular time, he scored twice against New York Red Bulls. Following a top-class performance, the Arsenal legend Thierry Henry gave him great compliments.

The talented striker quit the American league after a disappointing 2015 to move to Israel. Shockingly, the Tel Aviv striker played only one game in that particular year. He signed for Maccabi Netanya in 2016.

Schoenfeld, after a very short stint, went to Hapoel Tel Aviv and spent a year with 23 appearances. A year later, he went to Maccabi Tel Aviv and is still a part of the champions of Israel’s side.